An Important message from our founder    Read More

It's the anti-wrinkle cream that was deemed too good to be true.

Cynics believed that it was impossible that My Perfect Eyes could fulfil claims that their $40 cream could banish wrinkles in just seconds.

But when UK watchdogs investigated complaints that commercials for the product made outlandish assertions that couldn't possibly be true, the Advertising Standards Authority (ASA) ruled that these claims were indeed accurate. 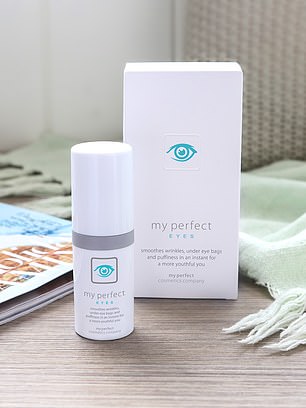 My Perfect Eyes is clinically proven to erase the appearance of unwanted wrinkles, fine lines and dark circles without the need for expensive and painful treatments

And now the My Perfect Eyes cream is making waves in the US and across the world, with one cream sold every 60 seconds globally.

The invisible concealer, which is currently on sale at $39.99 down from $69.95, is clinically proven to erase the appearance of unwanted wrinkles, fine lines and dark circles without the need for expensive and painful treatments, and within a minute.

So it works as an ideal solution for women (and men) who want an instant, transformative lift from a product they can apply at home, avoiding the need to visit a clinic and deal with needles or other invasive treatments.

This image shows the effects when one eye (left) is treated with My Perfect Eye, while the other (right) is left un-treated

The cream has also been shown to tackle the appearance of puffiness and under-eye bags.

It effectively creates an invisible veil across the under eye area, masking wrinkles and compressing puffiness.

In 2016, a television commercial for My Perfect Eyes aired in the UK featuring testimonials from customers and a voiceover making the claim that it 'appears to temporarily reverse time'.

A time lapse sequence showed the cream visibly tightening the bags under one eye over just 60 seconds.

Photographs of a woman 'before' and 'after' using the product showed that the puffiness under her eyes and her crow's feet wrinkles had decreased.

A UK dermatherapist, Dr Hugo Kitchen, was then heard praising the performance of the cream based on detailed before and after scans.

The manufacturer, My Perfect Cosmetics Company, presented evidence from a trial to verify the cream's effects.

A skin consultant also agreed that it worked. The ASA said: 'The consultant confirmed that the product contained ingredients which dried out when applied to the skin and formed a film.

'That process tightened the skin which made wrinkles appear to reduce dramatically. The consultant confirmed that those ingredients had an immediate effect, which was temporary, but its effect could last for several hours.'

The clinical trial involved a ten-hour study with 24 people where one eye was treated with the cream and the other was not.

The ASA said: 'The study reported an improvement in a significant majority of subjects with fine lines and wrinkles, as well as swelling.

'In addition, the study showed that in 50 per cent of the subjects, the treated eye was assessed to be "markedly better" than the control eye, at all three time points.

'We considered the effects seen were down to use of the product.'

In a ruling published shortly after, the ASA said: 'We concluded the claim made by Dr Kitchen, which was accompanied by the "before and after" photos, did not misleadingly exaggerate the effects of the cream.'

The cream has notched up hundreds of glowing reviews on the My Perfect Cosmetics Company website, with customers praising its effectiveness.

One shopper wrote: 'I thought the perfect eyes wouldn't work but it really does and I'm thrilled with how it does, got rid of my eye bags without having to have surgery, I use it every time I go out.'

Another raved: 'Very impressed...definitely works for me.. I am 55 with dreadful crow's feet. Happy with the result of wrinkles disappearing.. Bonus for me is it also works on my permanent frown line.'

The 10g cream that is currently on sale for $39.99 contains enough product for roughly 100 applications.

Customers can also upgrade to the 20g, 200 application bottle and receive a free My Perfect Night cream worth $29.99.

As well as My Perfect Eyes and My Perfect Night, the My Perfect Cosmetics Company produces a number of other skincare products. This includes My Perfect Facial, another anti-aging treatment that tightens, firms and tones the skin, which currently sells for $39.99.

DailyMail.com may earn commissions on sales from the links on this page.

Hear What The Morning Show Were Saying About My Perfect Eyes